Back to all posts

2019 was a very 'awarding' year for G.E.Q. and me. Our single release, “Nobody Knows I’m Here” won BEST JAZZ RECORDING during the 2019 Clouzine International Music Awards in the spring of last year. A couple of months later in June, G.E.Q. brought home the BEST JAZZ SONG award during the 2019 Akademia Music Awards. That recognition led to a nomination by the Akademia Executive Team for both the Artist of the Year Award in the genre of Jazz and the Akademia 2020 Artist Vision Award.

The winners of the Artist Of The Year Awards in each of the twenty-two categories will be announced at the Akademia Awards Gala this Friday evening, April 24 at 10:00 EST. The event will stream live from the Akademia Center in Los Angeles California.

G.E.Q. - Phil, Robert, Ibrahim, Jerry and yours truly recorded this track back in 2017. The magic happened in the very first take . . . and that was it. Later, additional horns were added to the track to give the cut that ‘big band’ sound and feel. Frankly, I’m pretty damn proud of the band and the cut. Hear it here: https://guymonensleymusic.com/nobody-knows-i-m-here 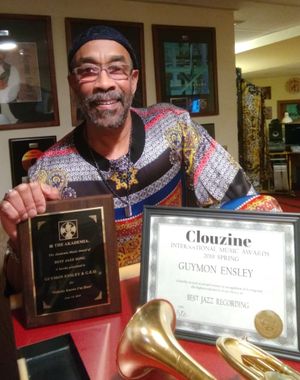